The Rocks were stripped away over time leaving behind the formations that we know today. These formations made of Tuscarora quartzite, are exposed grayish-white ridges 250 feet thick and known as one of the most imposing formations throughout eastern West Virginia.
An interesting fact about Seneca Rocks is that it served as a training ground during World War II for American soldiers. You may just be lucky enough to find one of the old iron pitons that were hammered into the Rocks while on your climb!

Hiking is also popular at Seneca Rocks. A trail begins behind the Discovery Center and provides an upward one and one-half mile climb that involves many steps. Hikers cross a trail bridge sitting over a river that is popular to fishermen, and taken through forests of shagbark hickory, maple, oak, and redbud trees. Benches are placed along the trail to provide hikers rest when needed. The trail will end at a platform for hikers to take in the view.

Rock climbers of all skill levels are especially keen to the 375 climbing paths at Seneca Rocks. Training skills at the Rocks are offered to both beginners and experts, but all climbers need to know the specifics of rock climbing before taking on Seneca Rocks.

What Kind of Gear do I Need?

Make sure you bring your climbing gear along with you to Seneca Rocks. Choose a daypack that allows you to move and is comfortable enough to wear on your back. It should also hold all of the following gear:

Seneca Rocks makes for some great photos, so be sure to bring your camera along with you! However, you do run the risk of dropping your camera, so remember to secure it in your daypack.

What do I Wear?

Clothing is dependent on the season, but climbing always requires comfortable, non-restrictable clothing that allows you to move and stay dry. It can get quite windy and even chilly while climbing the Rocks, so be sure to bring a rain jacket as well. You may also want to bring a sweatshirt or pullover. Additionally, closed toe shoes are a must.

Will There Be Food and Water?

You will need to bring an adequate amount of water along with you. Two to three liters per person, per day should be a typical practice when climbing at Seneca Rocks. Rock climbing burns many calories, so you will need to make sure you replenish them. You will also need to pack food items that are easy to eat and will keep you full, such as protein or energy bars. Water and food items should be able to fit in your daypack.

Seneca Rocks has the tallest 5th class summit on the East Coast. Though the Rocks offer difficulties for climbers, the two to four pitch climbs are the most traditional and popular climbs at Seneca Rocks.
In other words, you can place your own protection, but you will have to build anchors at every belay. Most routes lead towards the South Peak, so you can rappel down once you reach the summit.
Seneca Rocks tends to be a grade harder for those that are used to newer climbing areas, so you need to be sure that you are comfortable with following multi-pitch routes and rappel descends before climbing at Seneca Rocks.

Where to Eat near Seneca Rocks

Though you can bring snacks along with you, you are going to be hungry after you return from your climb. There are four restaurants near Seneca Rocks:

Located eight miles south of Seneca Rocks on US 33/28, Gateway Restaurant is a diner that offers reasonably-priced food for breakfast, lunch, and dinner.

Yokum’s Restaurant is on US 58, half a mile north of Seneca Rocks. Though the restaurant is open for breakfast, lunch, and dinner, the most popular item on the menu is the Yokum Burger.

Just under a 10 minute drive from Seneca Rocks, Harper’s Front Porch Restaurant serves pizza that is a must for many rock climbers. Harper’s is open for lunch and dinner only. It also has a store down the stairs where a wide selection of beer is sold.

Only 1.25 miles south of Seneca Rocks, Macksville Mart is a fuel station that offers breakfast biscuits and sandwiches that are great to bring along with you on your climb. You can also find lunch and dinner items at Macksville.
Canaan Valley is 40 minutes away from Seneca Rocks, but there are a few restaurant staples that are worth a try:

All rock climbers should try the food and beer at The Purple Fiddle. Most days, you will find live music being performed at the restaurant for an evening of great food, beer, and music.

Things to do in Seneca Rocks, WV

If you plan to spend a few days near Seneca Rocks after your rock climbing expedition, explore the area by trying some of these top activities:

Along the Seneca Creek tributary of North Fork South Branch Potomac River lies a swimming hole perfect for a quick dip or day out with friends and family. Be sure to bring a good book and a packed lunch to enhance the trip.

Schedule a tour to explore the hidden gem of Seneca Caverns located just a short drive away from Seneca Rocks. Made out of limestone that once lay under an inland island, Seneca Caverns formed over 460 million years ago.

Take in the scenic beauty of Seneca Rocks while horseback riding with Yokum’s Seneca Rocks Stables. An enjoyable ride along a trail that leads to an observation deck makes for an adventurous day out.

Tied to the Seneca Indians, Smoke Hole Caverns is another opportunity to explore caverns in the area. Schedule a tour to see the many rooms within the Caverns that have a history of corn whiskey making after the Civil War. Learn More

How do I Get to Seneca Rocks?

CanaanValleyCabins.com offers lodging and cabin accommodations just minutes away from Seneca Rocks for tourists to enjoy during any season. Seneca Rocks is one of the most visited natural sites in West Virginia and is known for its impressive views and razorback ridges. 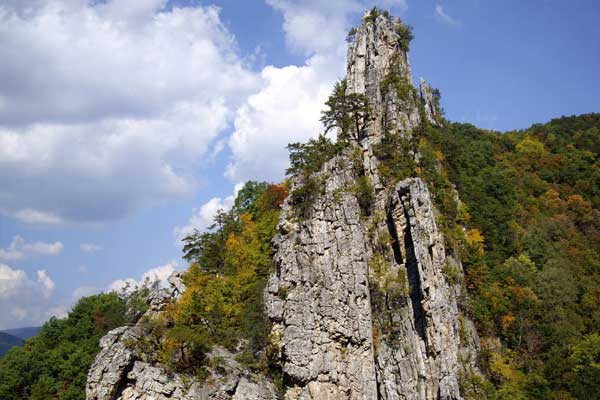 Check out the Google Street view from the top!